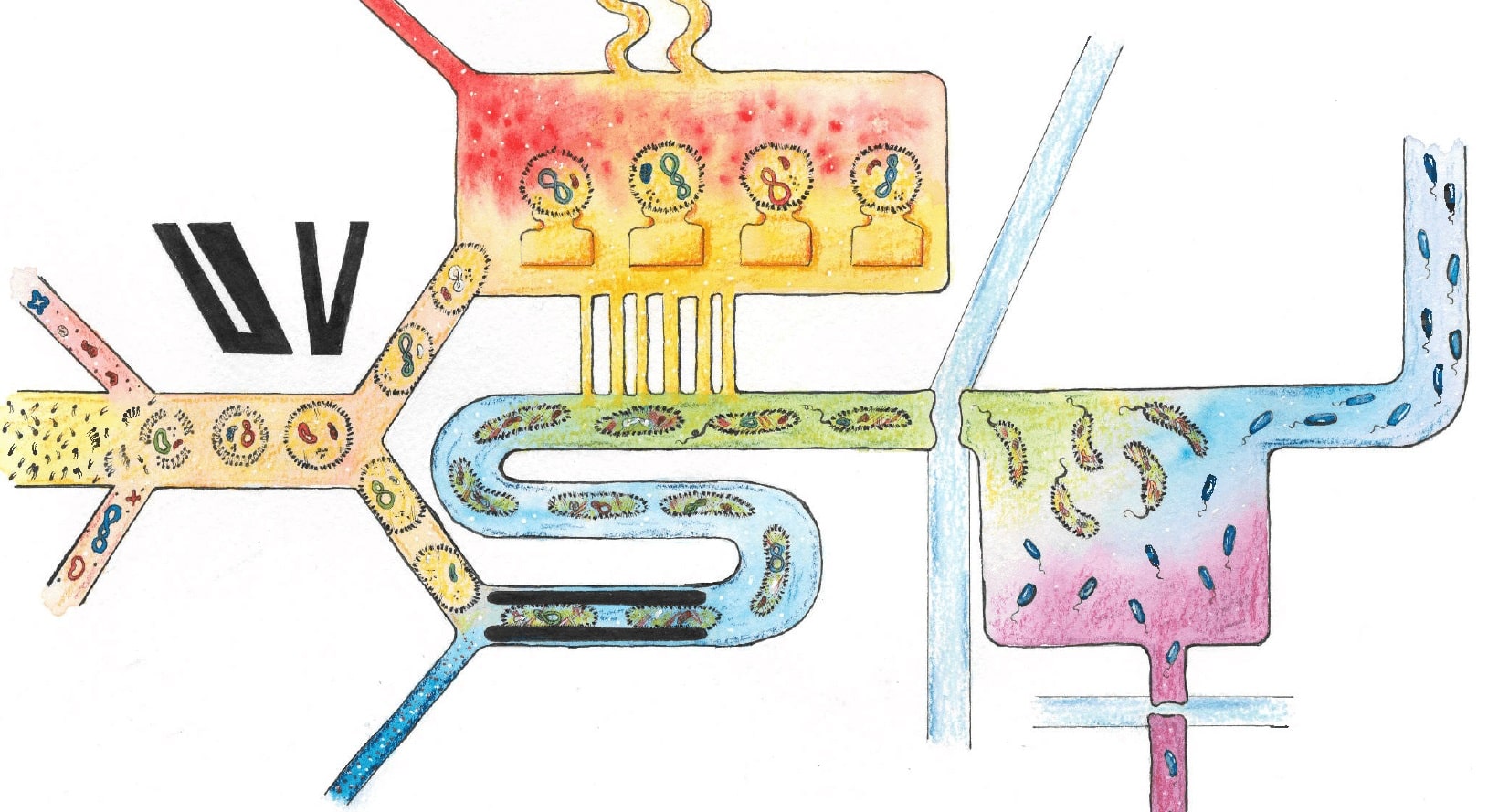 How Could Microfluidic Techniques Be Used to Improve Artificial Cell Development?

Taking live cells apart and reassembling individual components that are responsible for specific cellular processes helps scientists to not only understand the fundamentals of how cells can survive in given environments, but also to draw some ground rules of what defines being alive: the ability to grow, reproduce, use energy and respond to their environment and any changes that may occur. In the last decade, there has been growing interest in constructing artificial cells (ACs) from biomolecular components. These are less complex and easier to control than biological cells and could be engineered to perform functions in a host of applications. In this article, I highlight some of the key achievements in the AC field, review the role of microfluidic techniques in AC generation and detail how microfluidics could be used to solve some of the remaining challenges in AC development.

The definition of what could be considered an artificial cell is quite broad due to the immense range of complexity that these micromachines can possess. When talking about artificial cells, names like synthetic cells, minimal cells or protocells are sometimes used interchangeably. One commonly used definition of ACs is that they are structures that are equipped with cellular machinery and can perform biomimetic functions such as in vitro transcription-translation, DNA amplification, energy generation or motility.

ACs can take the forms of bioactive molecules/complexes that are compartmentalized by membranes composed of natural1,2 or synthetic3 surfactants, particles or polymers. ACs can also take form as membrane-less structures formed due to the physical properties of their components4. Synthetic building blocks have been used to create novel biomimetic structures capable of mimicking communication via signaling5, phagocytosis6 and “predator-prey” behavior3. Liposomes composed of phospholipids are the most commonly used chassis for ACs due to their close resemblance to biological membranes, and for this reason, they are the focus of this article.

State-of-the-art advances in liposome-based AC functionalization have enabled ACs to mimic cellular processes such as communication7, growth8, division9, ability to change morphology10, the equipment of purified4 and synthetic organelles11. Artificial cells have been engineered to utilize biological cells as organelles in biohybrid systems12 and to generate controlled multivesicular compartments that can mimic signalling pathways13. ACs possessing crucial cellular components such as a cytoskeleton14, ATP15 or phospholipid16 synthesis apparatus have also been developed. Further customization of ACs could potentially lead to the development of robust life-like cells for applications in drug delivery/therapeutics17, biosensor development18 and generation of artificial tissues19. Illustrations summarizing the described achievements using liposomes as AC precursors are shown in figure 1. 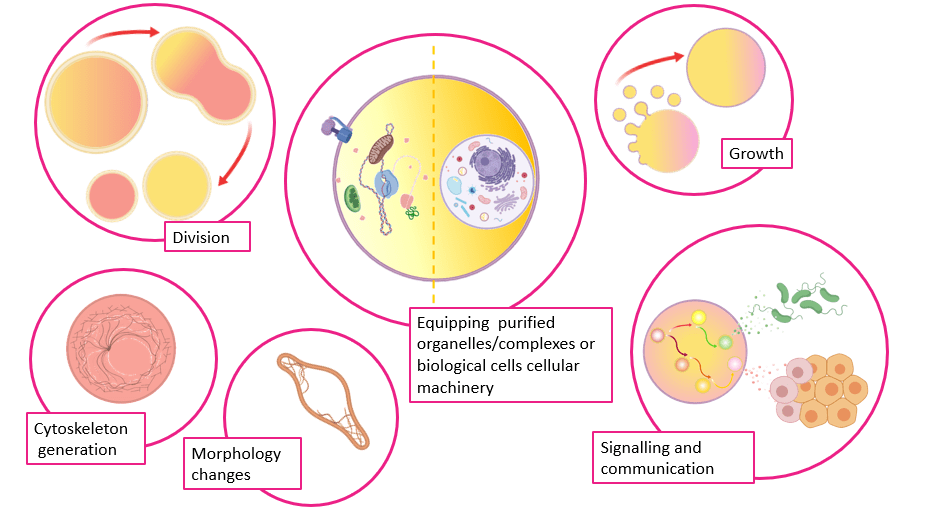 Even though significant progress has been made in AC generation there are still prevailing issues that involve, but are not limited to, the uniformity and viability of AC populations. Uniformity of AC populations will be taken into consideration first. Bulk liposome production methods such as electroformation, inverted emulsion transfer and extrusion have enabled researchers to produce high yields of polydisperse liposomes that are very useful for testing different AC design concepts. In order to develop and optimize ACs to fit the standards (such as stability, robust functionality, size) required for their applications, the AC populations should be homogeneous in their bulk properties. This is necessary for predicting and quantifying the behaviour of AC populations, e.g. what fraction of ACs express the desired protein or respond to stimuli from the environment. AC monodispersity could also be an important parameter in monitoring proliferation and the effects of AC volume on their engineered processes’ e.g. protein signalling in designed complex pathways.

Generating ACs using microfluidic techniques can provide high levels of production control. Microfluidic devices used for AC generation include chips made form glass20 and PDMS21. One of the techniques for producing highly monodisperse liposomes as precursors for ACs involves liposome generation using double emulsion droplets with octanol and phospholipids as the middle phase. Due to the nature of chemicals used in this method, excess solvent droplets pinch off the double emulsion droplets and are separated, leaving a liposome-pure population 21,22 (shown in figure 2.A). Another microfluidics-based method involves a gravity-driven transfer of water-in-oil phospholipid monolayer-stabilized droplets from an oil phase to an aqueous phase through another lipid monolayer separating the two phases12. Crossing this phospholipid separated interphase, the phospholipid monolayer-stabilized droplet develops a bilayer (shown in figure 2.B). There have also been efforts to develop a microfluidics-based method of producing droplet networks, where all droplets have a lipid bilayer at their contact area23. These cell-like droplet arrays can exchange compounds by diffusion through the lipid bilayer and act like microreactors (shown in figure 2.C). 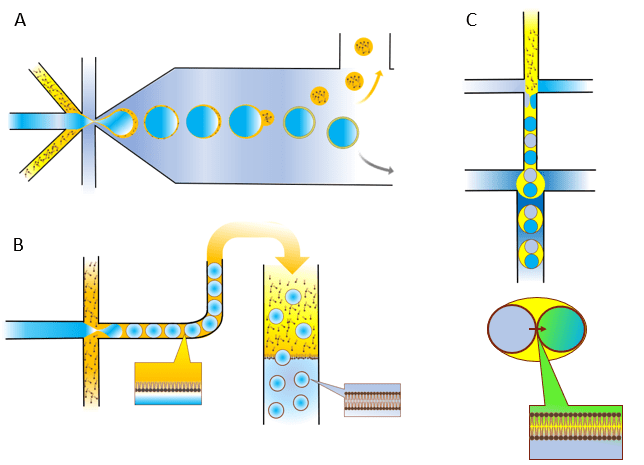 Another fundamental aspect of generating robust ACs is the manipulation of their viability. This is an important factor for their applicability as the ACs lifetime can direct what kind of application they can be used for. Taking ACs able to communicate with the local bacteria population that inhabit a polluted water source as an example, the amount of time an AC can survive in such conditions is dependent on its designed function. Will the AC monitor the pollution levels long-term or would the AC send a signal to the local microorganism population to perform a specific task and after the task is complete it can biodegrade? Environmental factors can also affect the applicability of ACs. Consider a therapeutic AC, that can transfer drug molecules to a medical target. The drug-loaded AC would circulate in the patient’s blood undetected by the immune system, reach the target andrespond to stimuli (e.g. biomarker, pH) by slowly releasing the drug cargo. In this example, the therapeutic AC must sustain stability when different environmental factors such as pH changes or macrophages are present.

Conditions that can affect the AC viability require optimization and close monitoring. Microfluidic chips can be used totrap24 and monitor ACs25. The viability of AC populations could be tested under controlled conditions, where nutrients are being pumped into the trapped AC population and different chemical compositions of surrounding media and its changes could be evaluated. These microfluidic chips would function as micro-incubators and could be used to predict how ACs would behave in natural environments. Further customization of described micro-incubators would evolve into lab-on-chip devices that could be used to mechanically manipulate the AC shape26, size27 and sort them by size28. The foundation for these microreactors has been designed by numerous research groups. Joint collaborations from researchers of different disciplines are needed to make these ideas a reality.

The ACs research field is garnering more and more attention and research groups form large collaborations, such as the Bristol and Max Planck institute project MaxSynBio, the USA collaborative project Build-a-Cell or the London-based Imperial College London and Kings College London joint research project fabriCELL. Synthetic biology is not regarded as science fiction but is considered a great investment opportunity. Just this year synthetic biology commercialization was vastly discussed in the synthetic biology conference SynbiTECH2019 in London where key stakeholders from different industrial and academic backgrounds gathered to discuss how to create a multibillion-dollar synthetic industry. Robust ACs are going to be the next innovation that will be crucial not only for fundamental studies, but also for numerous applications that require programmed structures that can perform complex tasks such as interactions with pathogens, pollutants, cancer cells, damaged cells or to act as microreactors, biosensors, constituents of artificial tissues/organs. The utilization of microfluidic techniques is essential for accelerating the AC field growth and as a tool for quality control of ACs as a product.

I am a Leverhulme Trust funded PhD student at Imperial College London working on artificial/biohybrid cell generation and application. I finished my Biochemistry Bachelor's and Master's degrees at Vilnius University, Lithuania. During this time, I used droplet microfluidics to work on cell-free protein expression using DNA microparticles. I had an internship at the Max Planck Institute for Biochemistry, where I studied Huntington disease yeast model morphology using CryO EM. I also had the chance to do an internship at the University of Cambridge, where I explored double emulsion and liposome generation using droplet microfluidics. In my free time, I enjoy painting and drawing.