Microfluidic technology is based on devices capable of handling micro to picolitre amounts of samples, and their applications are diverse ranging from pharmaceuticals, healthcare to the chemical industry. As this technology is being embraced across industries and academic fields, its market value has been steadily increasing into a billion-dollar value. To understand the current and the future market of microfluidics the origin of these “micro-plumbing” devices must be reviewed. Microfluidic technology can first be found in analytic methods such as gas-phase chromatography (GPC), high-pressure liquid (HPLC) and capillary electrophoresis (CE) driven by technological demands in breakthroughs in molecular biology in the 1980s such as genomics and DNA sequencing1. Such early key applications lead to the recognition of the high potential of microfluidics to revolutionize billion-dollar markets such as the pharmaceuticals, healthcare and chemical industry. The optimistic evolution of microfluidics is reflected also by its market value which has been steadily growing from USD 1.59 billion2 in 2013 to USD 3.6 billion3 in 2017, and it is forecasted to surpass USD 10 billion in 20223,4. These predictions indicate a robust growth for the next coming decades. A demand for microfluidic technology exists worldwide with North America (> 40%) being the largest market followed by Europe (> 30%) and Asia Pacific (~18%), see Fig. 1.

In this global market, the In-Vitro diagnostics represent the largest portion of the microfluidic applications. Furthermore, the large North American market will continue to expand due to the increasing demand for Point-of-Care (POC) devices, many of which may be categorized as medical devices that can be covered by insurance companies. This can slowly be realized by quicker return on investments, the decline of manufacturing costs and further miniaturization of devices3. From these three advantages, miniaturization is key for the potential of microfluidics to become wearable POCs. For instance, microfluidic chips in laboratories are small devices that required large setups that include multiple pumps and syringes; thus, hindering their application as wearable devices. However, wearable devices will be based on non-continuous flow chips that do not need to be plugged to pumps. For example, pocket-size devices already exist to continuously monitor glucose in patients suffering from diabetes helping determine the correct time for insulin injections. The features of these type of devices can be extended to local monitoring/analysis and responsive drug administration. The type of processes that these devices can regulate is enzymatic reactions, detection of antibodies, cells or molecules6. Indeed, the prosperous future of microfluidics has attracted large corporations such as Roche, Becton Dickinson and Company and Abbott that are now leaders in Point-of-Care & Clinical and Veterinary diagnostics, with other major vendors such as Fluidigm Corp., Agilent Technologies Inc., Illumina, Inc., and Shimadzu3. Microfluidics also show potential in the cosmetic industry, for example, L’Oréal has recently released the first wearable microfluidics sensor capable of measuring pH for applications in aiding eczema and atopic dermatitis. The invention of microfluidic products starts from accomplishing proof-of-concept device which is later on an integration of different elements. Unquestionably, a steady increase in both scientific publications and patents have been seen filed proving that a genuine interest in developing new technologies exists (Fig. 2). 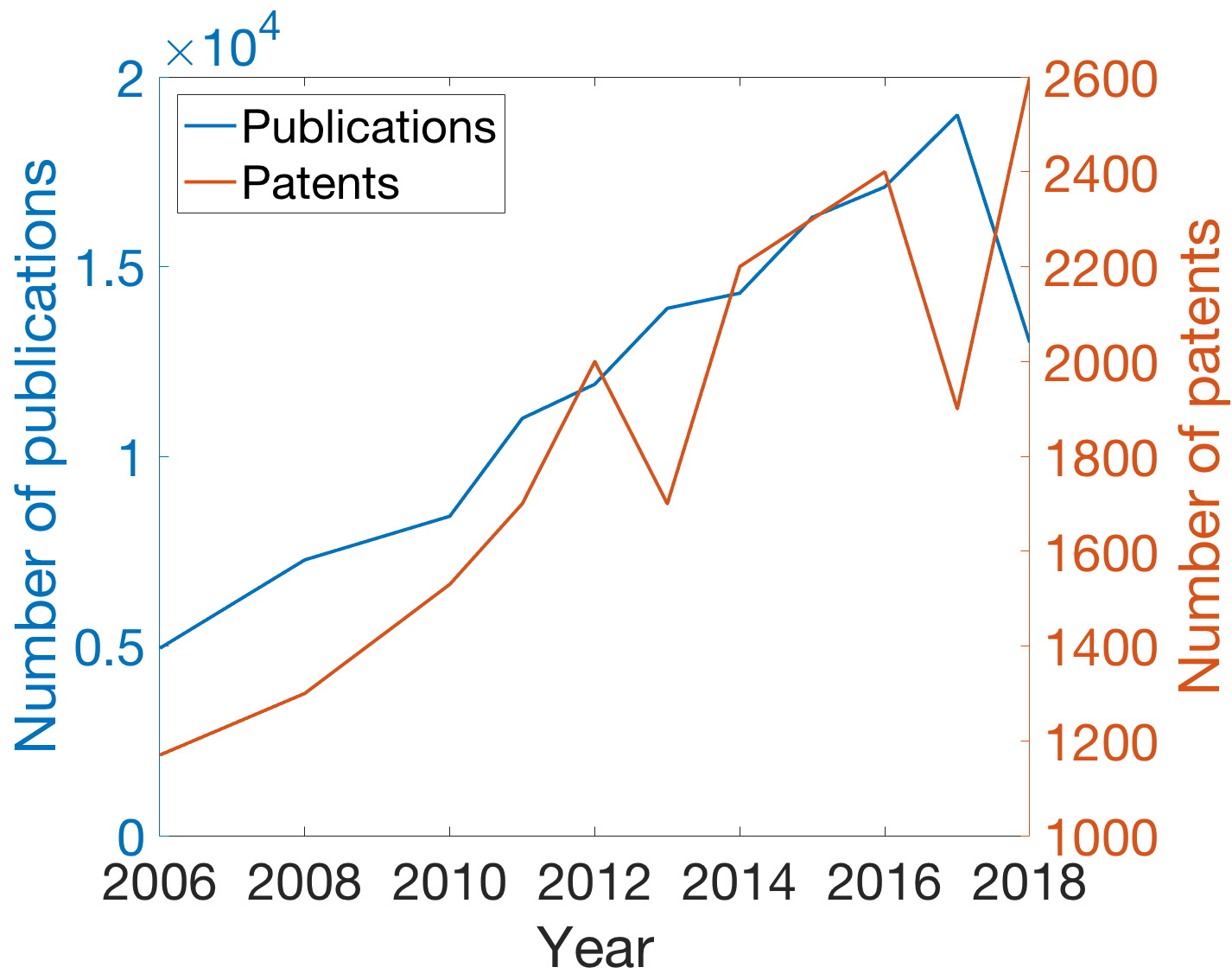 Unfortunately, the number of microfluidics-based products remains truncated despite a large number of proof-of-concept research and patents. The fact that these are not turned into products fast enough can be attributed to several factors. In academia, microfluidics is still not widely known across scientific fields and their apparent complexity shadowing the advantages prevents other scientists from using them. Additionally, the costs of devices often exceed the benefits of a lab-on-chip. In industry, the initial high capital investments and costly reagents and materials are obvious bottlenecks. As of today, there are no microfluidic systems employed for large scale manufacturing or pharmaceutical products from such systems7. Microfluidic technology must be cost-effective and integrable within larger machines to be feasible before reaching industrial applications8. Therefore, the areas of opportunity are to foster plug-and-play devices with well-defined standards in which interfacing individual chips are straightforward. On one hand, microfluidic technology needs to integrate into larger and powerful platforms based on the application and the technical aspects required. On the other hand, wearable devices need to be further miniaturized and suitable application niches need to be identified. It is unmistakable that by handling small liquid samples, microfluidics offers an evident potential to lower cost and increase high-throughput applications across industries. In conclusion, the market forecasts of microfluidics are optimistic despite the seemingly slow introduction of new microfluidic products.

8. Zambrano, A. Why Hasn’t Microfluidics Reached Consumer Market despite a Huge Number of Academic Inventions and Publications during the Past 15 Years? Microfluidic Circle 2018, No. October.

Adrian Zambrano is a scientist at the Max Planck Institute of Molecular Cell Biology and Genetics in Germany where he synthesizes protein/polymer scaffolds for micro-droplets and utilizes microfluidics for the encapsulation of enzymatic DNA replicators and other DNA-based assays. He holds a Ph.D. in physics from the University of Paris-Saclay/CNRS and B.Sc. in chemical engineering from the University of Nevada, Reno. His personal interests lie in the commercialization and development of high-throughput assays based on microfluidic technology.