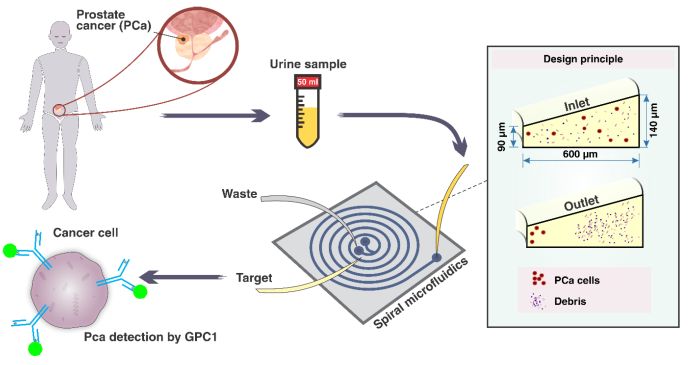 Posted at 09:05h in Latest Research by Pouriya Bayat

The tumors can shed tumor cells in the urinal tract every once in a while. These cells are often discarded from the body by urination. Enrichment, isolation, and identification of these cells can be an ideal liquid biopsy tool for the diagnosis of prostate cancer (PCa). In a recent study published in Cancers journal, a group of researchers from Australia has employed this concept to develop a microfluidic device for isolating prostate cancer cells.

The reported device consists of a spiral microchannel with one inlet and two outlets. The sample undergoes inertial focusing in the microchip. The inertial forces that the cells experience in the microchannel pull the larger cells towards the inner wall while the smaller ones remain closer to the outer wall. Consequently, the cells with different sizes lie on different streamlines and can be separated. They employed this concept to place the outlets such that the target prostate cancer cells end up in the inner outlet whereas the waste goes to the outer outlet.

The proof of concept tests included spiking the DU-145 cells, as the prostate cancer cells, into phosphate-buffered saline (PBS) and running through the spiral microfluidic channel. The pilot study revealed 86% efficiency in separating the target cells and provided a framework for testing clinical samples. Reportedly, urine samples from diagnosed patients and healthy individuals were tested with the microdevice and resulted in successful detection of >79% of the diagnosed cases.

“These results demonstrate promise of the spiral inertial microfluidic technique in terms of diagnosis and prognosis of localized PCa by liquid biopsy of urine, paving the way for inexpensive rapid, non-invasive diagnosis, as well as screening and monitoring therapeutic outcomes of PCa and other urology cancers.”, the authors concluded.

Simplicity, ease of fabrication, high volume processing, and minimal sample preparation requirement are the advantages of this microfluidic chip. However, the authors believe that the microdevice could be improved to be able to handle a wider variety of urine samples, including those with large urine crystals, by adding more outlets while the specificity could be enhanced by adding or combining more specific and sensitive antibodies. 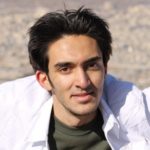 Pouriya is a microfluidic production engineer at uFluidix. He received his B.Sc. and M.A.Sc. both in Mechanical Engineering from Isfahan University of Technology and York University, respectively. During his master's studies, he had the chance to learn the foundations of microfluidic technology at ACUTE Lab where he focused on designing microfluidic platforms for cell washing and isolation. Upon graduation, he joined uFluidix to even further enjoy designing, manufacturing, and experimenting with microfluidic chips. In his free time, you might find him reading a psychology/philosophy/fantasy book while refilling his coffee every half an hour. Is there a must-read book in your mind, do not hesitate to hit him up with your to-read list.